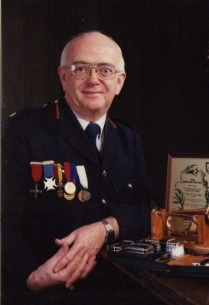 It is with sad regret to share the news of the death of John Sumner BEM.  Formerly of St. Matthew’s Preston, died on the 7th May in hospital. John had been a member of the Brigade since November 1939 when he joined the JTC. John rose through the ranks to become the Company Commander in 1953. He held this post until he became Lancaster Battalion Commander in 1983.

John also held various Regimental positions. During the 60’s, 70’s and 80’s he served on the Brigade Council and the Brigade Executive Committee and was also a member of the Staff for the Arnhem camp, the 80th Anniversary camp, at Avon Tyrell, Iona and Spring School. He was extremely proud of the fact that he was honoured with the British Empire Medal for his services to Youth work, in the 1990 Queen’s birthday Honours list. He had been a member in different guises for 58 years, and was a supporter of the Brigade right up until his death.

Rest in peace and rise in glory.