A Tribute to the life of Ken Siddons RIP

A Tribute to the Life of 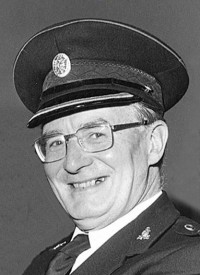 Ken Siddons was born on 18th March 1924 and passed away in Milton Keynes Hospital on 22nd November 2016 after a short illness. He was aged 92.

Ken joined the Church Lads’ Brigade in 1937 as a lad of 13 at St. Luke’s, Company, Miles Platting which belonged to the 1st Battalion, the Manchester Diocesan Regiment.  Within two years he was promoted to sergeant. At the outset of the Second World War Ken was still young enough to continue Brigade work but old enough to become an Air Raid Precautions messenger but took interest in many other things, such as following the fortunes of Manchester City Football Club.  He was elated at City’s rise to the top in recent years. Above all, he held a very keen interest in a certain member of the Church Girls’ Brigade - by name of Olive.

All these activities were suspended in 1942 when at the age of 18 Ken was called up for military service in the Royal Navy. He was trained in marine engineering to become a mechanic on board Motor Torpedo Boats with Coastal Command. MTBs were powered by 4 Merlin engines, the same power plant as that of a Lancaster Bomber. He led an exciting life patrolling the British coast with occasional trips to the Channel Islands “to create a little mayhem and keep the German Garrison on its toes.”  More significantly, on 6th June 1944 Ken was in a MTB which formed part of the Fleet Protection Force during the D-Day Landings.  By the time he completed his Naval service in 1947 he had attained the rank of Chief Petty Officer.

Soon after he left the Navy, Ken married his childhood sweetheart, Olive.  They had two sons, John and Steven and then, nearly twenty years later, they adopted Ann and then Susan.  Sadly Olive passed away in 2006 and two years ago Ken had to cope with the sudden death of his elder son, John, which he bore with pragmatic fortitude.

During the war many Brigade companies were temporarily disbanded due to their leaders being called up for military service and St.Luke’s company was no exception. However, when Ken and his brother-in-law, a Mr A Dodd, were demobbed they wasted no time in reforming the company. Ken eventually took over as CO of the St Luke’s Company in 1950 and supported by Olive he remained there for the next fourteen years until Major Ernie Worthington, recognising his administrative skills, invited Ken to join the 1st Battalion Staff as Adjutant.

During the early 1960’s, large areas of inner-city Manchester were demolished to make way for new housing stock. The developers were blamed for tearing whole communities apart. Certainly, as a direct result of this redevelopment, many Brigade units were forced to close and the powers that be decided that it made sense for the Manchester Regiment of the Brigade to reorganise from 9 small battalions into 3 large battalions.  It was at this point that Ken, already a highly respected officer in the 1st Battalion, was promoted to Lt. Colonel and appointed to command the newly formed Central (Cathedral) Battalion which boasted 33 units.

As the ‘sixties unfolded, and spurred on by the new enthusiasm for extension inspired by the late Ken Mathers, the National Director of Training, the Battalion grew in strength to nearly forty companies.  Obviously this was becoming too much to manage and eventually the Battalion was split up - but for a while Ken headed the largest Battalion in the country.

From the dark days of Manchester’s re-development Ken led the Central Battalion into an exciting decade in its own development. Battalion meetings were lively to say the least but a full programme of activities was enjoyed by all. Ken was immensely proud to lead this enormous battalion on the Annual Parades to Manchester Cathedral and to the famous Belle Vue Review which was still being held annually in the Speedway Stadium.  Ken was a keen supporter and encourager of the Battalion’s activity in National Sports and Band Competitions as well as the fledgling Duke of Edinburgh’s Awards Scheme. He placed great emphasis on officer training and over forty years later the present Battalion is still benefiting from the legacy of that training.

Ken was particularly proud of his Central Battalion Band under the leadership of Tony Wilkinson.  I recall him speaking of one memorable occasion when, at the request of Major Sir Hamish Forbes (Brigade General Secretary at the time and a WW2 hero in his own right) the Band played for the assembled Bishops of the Anglican Communion in the Inigo Jones Banqueting Hall on Whitehall.  Just prior to the engagement the band of nearly fifty members ‘fell-in’ on Horse Guards Parade and marched along Whitehall to the Inigo Hall - receiving a Household Cavalry salute as they left Horse Guards.  After the performance in the Hall, the Band marched (as Ken himself described) “playing in full glory” along Whitehall, around Trafalgar Square to St.Martin-in-the-Fields for an Evening Service – and this on a SATURDAY evening in London.  Ken said “Major Forbes and I were so very proud of that Band.”

Ken was always on the lookout for activities that might bring the battalion together.  He was one of the instigators of “Showtime 73” which was a memorable show rehearsed for six months and put on by members the Central Battalion for six continuous days to full houses at the Lesser Trade Hall Manchester.  Although an excellent bass singer and an accomplished pianist himself, Ken wasn’t in the show but he became familiar with many of the sketches and I know he was playing and singing the choruses at his home for many years well into his retirement.   Showtime ‘73 is still fondly remembered by those who took part but unfortunately, key members including Ken, left the area soon afterwards and the show was never repeated. (When Ken’s death was announced, one colleague recalls “On one of his visits to our company, he played Beatles tunes on the old piano in our Church Hall to entertain us all”).

Away from the Brigade, Ken began his working career with Chester’s brewery company where he studied to gain qualifications in the Institute of Chartered Secretaries and Administrators.  His studies were eventually rewarded when he was appointed Company Secretary of Threfalls and Duttons brewery in Blackburn. Following a takeover, this became the Blackburn Division of the Whitbread Brewery Company. He eventually became a Fellow of the Institute of Chartered Secretaries. His talents were obviously recognised as he was soon promoted in the mid 1970s to Assistant Company Secretary at Whitbread’s Chriswell Street Headquarters in London. Unfortunately, that move effectively ended his Church Lads’ Brigade career.

Ken moved home, accompanied by his wife Olive and younger children Ann and Sue, to the village of Stewkley, Buckinghamshire, from where he began commuting to Euston on a daily basis.  Being of strong Christian Faith since childhood, Ken and Olive were soon participating fully in St Michaels Church where Ken was thrilled to discover that it had once boasted a Church Lads’ Brigade Company - albeit many years ago.  Ken also became involved in other aspects of village life including serving with the Royal British Legion, as Parish Councillor, on the Village Hall Committee, founding the Stewkley Singers, and instigating local Band Concerts. Having made some great friends, Ken and Olive were happy living at Stewkley and after Ken’s retirement they remained living there for the rest of their lives.  Even in retirement Ken kept in touch with Whitbreads through its Pensioner Visitor Scheme.  There is no doubt he gave great comfort to a large number of company pensioners and he will be remembered for that.

It was well into his retirement on a rare visit to his home, that Ken revealed to me that back in the 1970s, he was awarded the Freedom of the City of London for Services to Youth - and to the Church Lads’ Brigade in particular.  Such was the modesty of the man. Nobody ever saw him parading his sheep through the City but rumour has it that he had a great stock of woolly jumpers!!!

Although Ken had retired from active Brigade service in the mid 1970s he kept in contact with the movement by becoming a Life member of the Brigade Association. During this time he continued to attend various Brigade events if they were within reasonable travelling distance. On one such occasion he was present for the Opening of the Church Lads’ & Church Girls’ Brigade Memorial Garden at the National Memorial Arboretum near Lichfield.  He was thrilled that such a Memorial Garden had been created, and in his memory, a Poppy Cross bearing his name, has already been placed on the central plinth.  Ken’s name will be added to the Roll of Remembrance and read out at the Brigade’s next Annual Remembrance Service.

Our thoughts and prayers are very much with Steven, Ann, Sue and the grandchildren.