On behalf of the Director of Music and I, please may I invite musicians to attend our forthcoming recruitment weekend. The past year has been very successful for National Band and we look forward to building upon this over the next 12 months.

As always, we are looking to recruit drum, mallet, bugle, brass and woodwind players who are of a good standard and are proficient at drill.

Next year’s annual concert will be at St Mary’s Church, Hinckley. We will also be performing again at the Royal Military Academy Sandhurst and holding a 5-day tour at the end of next Summer. Dates for the next band season can be found below.

We would love to welcome you to National Band and/or the bugle school. Therefore, I encourage you to attend our recruitment weekend with a view to becoming part of the National Band family.

If you have any questions or require further information, please do not hesitate to contact me.

The CLCGB Music and Drill Competition will be taking part this year at the Hermitage Centre Whitwick, Saturday 29th September 2018 (10am-5pm approx).

We currently have a core of companies who attend yearly and it would be great to see some new faces.

To see how great this day can be watch the short video below.

Even if you do not decide to enter it would be really good to see some new faces in the audience (perhaps you could talk to one of us at the event about entering some members in 2019). 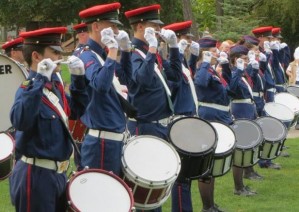 The CLCGB have recently been advertised on the Diocese of Exeter website for their tour of the English Riviera. http://www.exeter.anglican.org/events/church-lads-church-girls-brigade-national-band/

Written by Jason Greenwood on 16 September 2017.

As you may be aware the Brigade are holding a National Anniversary Parade and Service on Saturday 18th November at York Minster.  The parade will be forming up at 1pm and the service starts at 2.15pm.  All Brigade members and leaders are invited.

Any CLCGB musicians, that wish to play at the 125th Anniversary Parade and Church Service, are invited to the rehearsal on Sunday 29th October.  The rehearsal will take place between 1000-1400hrs at:

Due to the limited time available, the rehearsal will be intense.  Therefore companies should only put forward their more experienced musicians.  Those wishing to participate must attend this rehearsal, as unfortunately, it will not be possible to have a rehearsal on the day.

For further information, or if you have any questions, please contact Lionel Burdett ([email protected]). 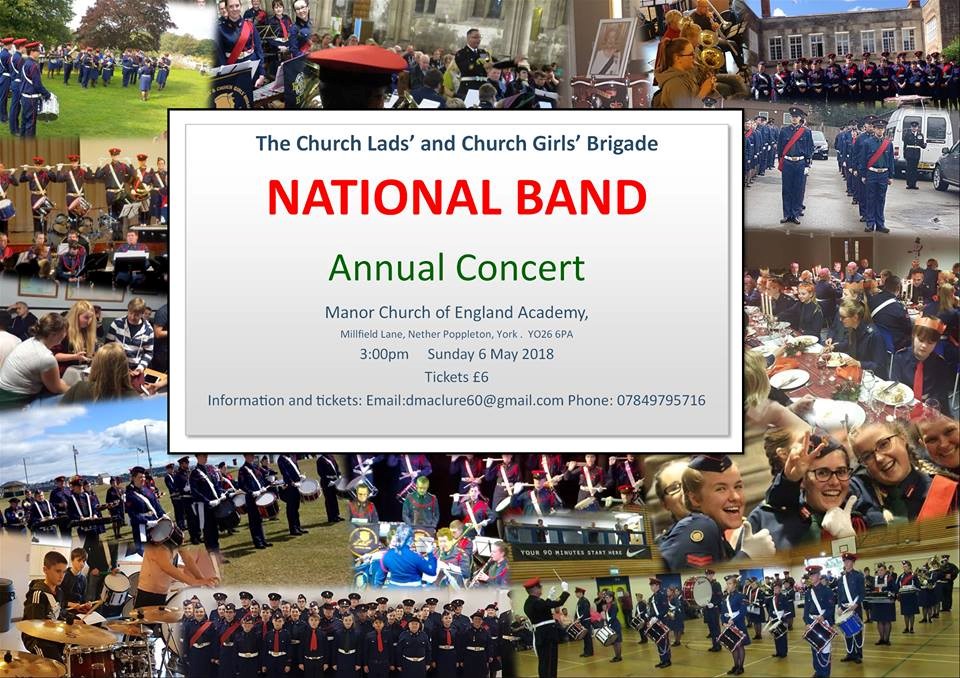 This years National Band Concert takes place in Beverley on Sunday 30th April 2017. Tickets are only £5 and can be purchased by seeing the details below. 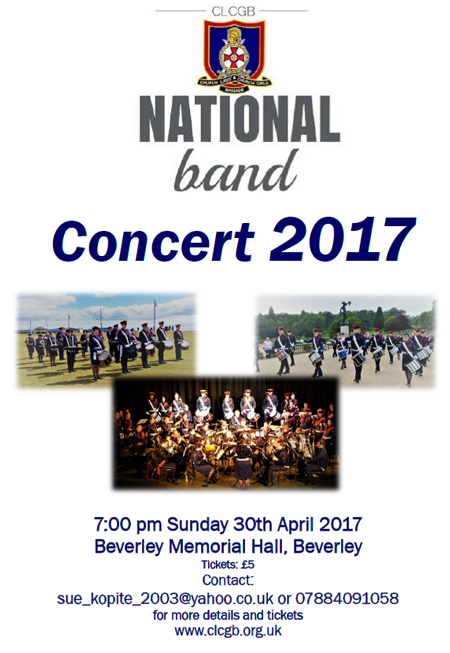 After twenty years the Church Lads’ and Church Girls’ Brigade National Band is making a return to the stunning English Riviera on tour between 27th and 31st  July.

Since touring in Devon in 1993 the CLCGB National Band has played all over the country, Europe and even New York, but this year, we decided it was about time to come back and enjoy all that the South West has to offer. To visit where we are playing click the following link: http://nationalband.moonfruit.com/tour-2015/4590020635

Our summer tour this year took in the many sights of the beautiful county of Devon. National Band hasn’t been to Devon for around twenty years so we thought it was about time we went back.
Our base was Grenville House Outdoor Education Centre in Brixham. www.grenvillehouse.co.uk . It’s right on the harbour and was a perfect centre, providing everything we needed in terms of accommodation, rehearsal space and communal areas. We had sole use of the place which meant we were able to use the space as we wished, including bugle calls! We were very well looked after and the staff couldn’t do enough for us, especially the kitchen staff on curry night! 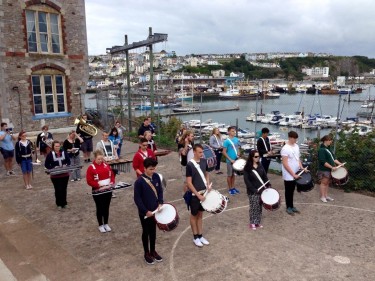 The Monday morning journey down was, for some, very long and arduous. Those from the North West had a particularly horrendous time thanks to the good old M6! While we were waiting, the rest of us got settled into our rooms and even had time for a visit to the beach-some even took a dip in the sea!
Monday evening was a quiet affair as everyone was tired but teams were sorted and challenges for the week were set including a scavenger hunt and a collage project!

On Tuesday we were up bright and early for breakfast and a last minute run through of the music and routine on the playground. 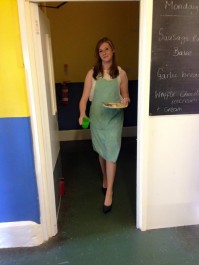 Tuesday evening was the aforementioned curry night. We were leaving shortly after dinner for a concert at the Royal Marines Commando Training Centre so we’d all got ready beforehand. The kitchen staff were adamant that no one spoilt their outfits so they were handing out tea towels and even a full apron to cover a white dress! 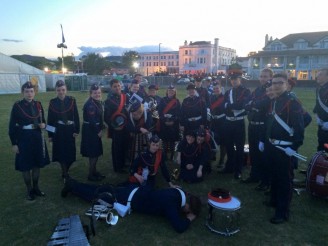 The concert was brilliant and it was so good to see three ex-National Band members in the band. My son in particular was transfixed by the drum corps!

Wednesday was the busiest with a performance in the morning at Paignton Green as part of the Torbay Carnival, another performance at Goodrington Sands at lunchtime, followed by some free time involving a water park, some crazy golf and sandcastle building. After dinner we were back out in uniform to have the great honour of leading the Torbay carnival on a two mile route through Paignton. A fantastic effort from everyone involved! Three performances in one day is tough but we did it! We even managed to squeeze in a picture in front of the building (now the Palace hotel) which was Walter Mallock Gee’s childhood home.

Thursday morning was rather quieter with a team “sports day” challenge and a last minute chance to get the remaining items on the scavenger hunt list and put the finishing touches to the collages for judging that evening. Thursday afternoon saw us doing two performances and Cockington Court which we found out (thanks Rob Bolton) was Walter Mallock Gee’s mother’s family home. 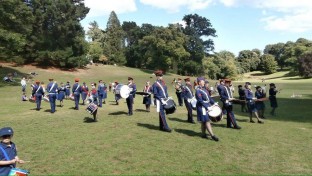 On returning to the centre we headed down to the beach for a final dip in the sea (for some mad fools) and photos.

The prize giving and judging took place later that evening along with the finals of the hotly contested table football and table tennis competitions with smiles for some and sour grapes for others ;-) The effort and teamwork involved was fantastic and it was evident that everyone had really enjoyed themselves. 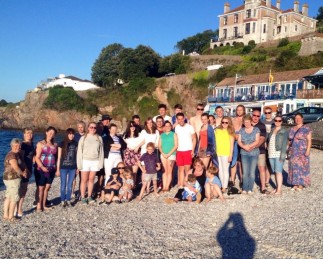 Operation clean-up commenced on Friday morning with everyone pitching in to get all the kit in the correct vehicles. Despite having to work around workmen replacing doors at the centre we got everything packed away and said our final goodbyes. The less said about the homeward journeys the better but massive thanks again to the minibus drivers who got everyone home eventually! It had been a fantastic if tiring few days and we are immensely proud of each and every member for their commitment, resilience and cooperation during what was the first tour in charge for the senior team. They should all be very proud of themselves and their parents should know what remarkable young people they have. It really has been a privilege to spend time with them-just give us a while before we start thinking about the next one ;-)

Written by Jason Greenwood on 24 November 2015.