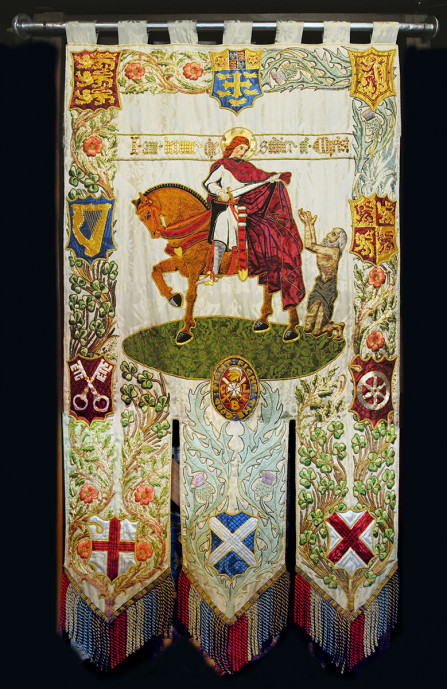 This week sees the Centenary of the dedication of the Church Lads’ Brigade’s international war memorial in Westminster Abbey, Rather than marking its significant contribution to the Great War with a plaque somewhere the CLB decided to offer a memorial banner to Westminster Abbey. Following discussion with the Abbey, the idea was to depict St Martin, the Brigade’s Patron Saint and the Banner was to be worked by the Royal School of Art Needlework at South Kensington. The cost of the Banner would be raised by a levy of one penny per member, past and present. The Brigade Magazine described the Banner: “… a real freewill gift to the glory of God. … So see to it that your penny sent at once entitles you to a share in this age long honour of a place in Westminster Abbey”.

The date of the Banner’s presentation and dedication in the Abbey was the 9th November 1921. There were between 2,000 and 3,000 members, past members, parents, veterans of numerous battles and theatres that evening. After singing the Brigade hymn, Field Marshal Lord Grenfell, Governor and Commandant, presented it to the Dean, The Right Reverend Herbert Ryle, who laid it upon the high altar and dedicated it:

“In the faith of Jesus Christ we dedicate this Banner to the glory of God and in memory of those members of the Church Lads’ Brigade who gave their lives for their King and Country in the Great War. In the name of the Father and of the Son and of the Holy Ghost - Amen”.

In silence the escort to the Banner presented arms and the Brigade Prayer resounded throughout. The Dean addressed the congregation recalling the 20,000 fallen, the Victoria Crosses and other distinctions. He pledged that the Banner would be kept in the Abbey in perpetuity and in remembrance of the service, discipline and devotion in ‘fighting the good fight’ as the motto demands. 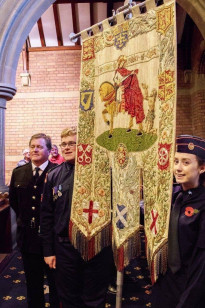 The Banner was designed by the Reverend Edward Dorling, an authority on ecclesiastical heraldry. It was made from white silk brocade, embroidered in rich silks and measures six feet six inches by three feet. The Banner depicts St Martin parting his cloak to give to the beggar. It bears the legend ‘I am become the soldier of Christ’. Above the pictorial scene are the arms of the Collegiate Church of St Peter, Westminster and below is the CLB Badge with the motto Fight the Good Fight. Its background is a rich cream colour bordered with the coats of arms of England, Scotland, Ireland and HRH The Prince of Wales, along with those of St George, St Andrew, St Patrick, St Peter and St Martin. The arms are entwined with the Roses of England, Thistles of Scotland, Leeks of Wales and Shamrocks of Ireland.

In recent years, the Brigade has utilised the Banner for its own remembrance services. On 5th July 2016 an Anglo-Canadian memorial service entitled ‘Swift & Bold’ was held at the Church of St John the Baptist Hugglescote, Leicestershire. It was carried by Lance Sergeant Liam Warren (St Augustine’s Newfoundland) and Private Tilly Dale (Hugglescote UK). The Banner was again loaned for a commemorative service at St Mary’s Denham, Buckinghamshire in 2019 where it was carried by Lance Corporal Ellis Williams of St Michael’s Tintern Company. 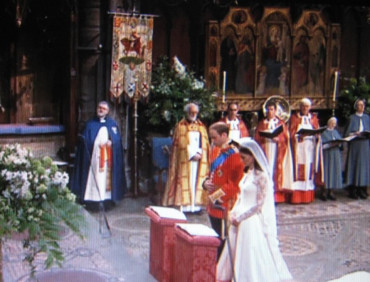 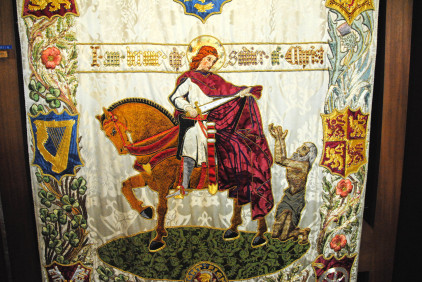 The Abbey presently have six embroidered processional banners which are carried at church festivals and certain special services. At other times, they usually display them either side of the high altar and are kept in the Sacristy in the Chapter House Crypt, where they may be viewed by prior arrangement.