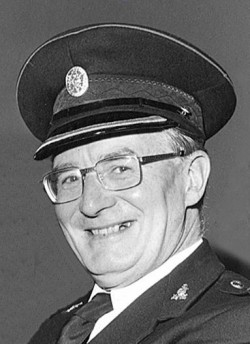 It is with deepest sympathy to report that upon opening our first Christmas Card of the year this morning it was with great sadness that we have discovered it had been sent posthumously on behalf of a great friend and Brigade colleague Ken Siddons. The accompanying note read as follows...

It is with profound sadness that we inform you of the passing of the much loved and respected Kenneth James Siddons of Stewkley, Bucks.

Ken passed away after a short illness, at Milton Keynes hospital on 22nd November 2016.

Funeral arrangements are open to all and are detailed as such:

Followed by a cremation at Crown Hill Crematorium, Milton Keynes

And finally a celebration and toast with finger buffet at the Swan Pub, Stewkley

Maynard Scott wrote. As some of you know Ken was a member of the Church Lads’ Brigade from boyhood at St.Luke, Ancoats Company until he became a member of the 1st Battalion staff,  Manchester Diocesan Regiment. When Manchester Regiment re-organised from nine battalions into three large battalions in the mid 1960s Ken, already a highly respected officer, was appointed Commander of the Manchester (Central) Battalion comprising 33 units – the largest battalion in the country.  He retired from the Brigade about ten years later when he moved to Buckinghamshire.