A Tribute to the Founder of the CLB

A Tribute Paid to Founder of the CLB 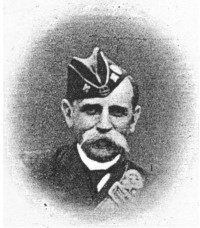 The year 2016 held three significant anniversaries for the CLCGB, the 125th Anniversary of its original formation in 1891 and the centenaries of the Battle of High Wood and Beaumont Hamel which saw much sacrifice. The former slipped by almost unnoticed and the latter were commemorated with due ceremony by the Brigade in the UK and Newfoundland. A further tragedy was the death of the Founder, Walter M Gee, who was still in office as Brigade Secretary. He passed away at home, 12 The Orchard, Bedford Park, now W4, after a short illness.

Having paid respects at the Founder’s grave in 2005 to mark the 160th Anniversary of his birth, I felt it right that the centenary of his passing should not go unmarked. (See Brigader July 2005). So I posted a portrait picture an accompanying text onto social media on the anniversary date of 23rd December. On Christmas Eve I made my way to Hillingdon & Uxbridge Cemetery with a Christmas wreath with this dedication: 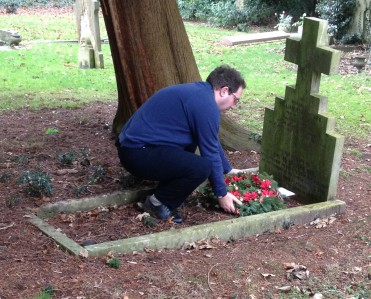 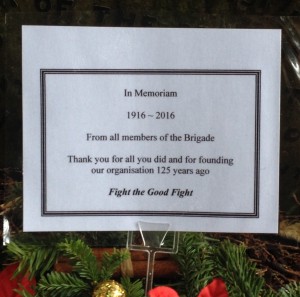 From all members of the Brigade. Thank you for all you did and for founding our organisation 125 years ago

Affixed to the flower leafs were two Forget-me-nots that had been sent all the way from Newfoundland for wearing on Remembrance Sunday. It seemed appropriate to use them on this occasion, marking the global influence of his work.

The Funeral had taken place on 29th December. The service was held at St. Cuthbert's Philbeach Gardens among those present, other than family members, were the Rev Lord Victor Seymour, Brigadier General John Craigie, The Bishop of Barking and Mr Adrian Pollock. This was followed by interment at the family grave. The cortege was escorted by a party of the 109th Reserve Battalion (late 19th) King's Royal Rifle Corps, formerly members of the Brigade. At the Cemetery the body was borne through a guard of troops with reversed rifles, by six Sergeants of the original 16th KRRs who were trained at Denham. The Rev Edgar Rogers read the committal prayers, and afterwards three volleys were fired over the open grave, followed by the sounding of the clear notes of the Last Post. In The Brigade of February 1917 Field-Marshal Lord Methuen, late CLB Governor and Commandant, stated 'No man has done more for the youth of England than Mr Gee…' A memorial service was held on 27th January 1917 at Southwark Cathedral, the sermon being delivered by Rev Rogers, the new Brigade Secretary.