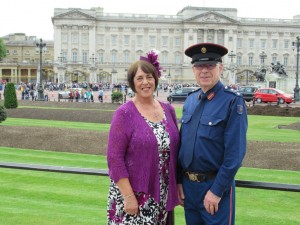 On Tuesday 16th May, TWO members from Longridge’s Church Lads’ and Church Girls’ Brigade were honoured for their long service and fundraising efforts with invitations to a royal garden party at Buckingham Palace, hosted by Her Majesty The Queen.

Captain David Hartley and helper Jean Carlin joined around 8,000 other guests at the event – the first of three hosted by The Queen this year. Other guests included servicemen from the three armed forces, members of the clergy and those who have donated their time to, or raised money for, their local communities.

As well as The Queen, the garden party was also attended by the Duke of Edinburgh, the Duke and Duchess of Cambridge, Prince Edward, Princess Anne, Princess Beatrice, Prince and Princess Michael and the Duke of Kent.

David and Jean were joined by David’s wife Stella and Jean’s daughter Vicky Croasdale. They met with fellow Brigade officers from all over the country, who had also received invitations, for a quick photo outside the palace.

Jean said: “It was a real privilege and delight to be invited to Buckingham Palace. The afternoon was a wonderful experience and one that will be remembered for many years to come. We enjoyed seeing the fashion parade, people watching and listening to the military bands, not to mention the wonderful afternoon tea.” She added: We especially enjoyed seeing so many members of the Royal Family.”

Both David and Jean were nominated by Officer in Charge Janet Redding for their dedication to the Church Brigade over the last 30 years and as part of the Brigade’s national 125th anniversary celebrations. The year will culminate in a special service of celebration at York Minster in November and the Brigade is busily raising funds to hire a coach to take as many members from Longridge as possible to the service.