On Sunday, 8th September a large congregation at Holy Trinity, Platt, Manchester, celebrated one man’s 75 years of membership and 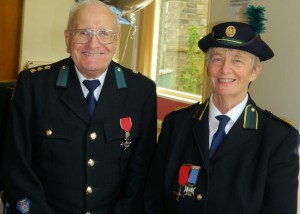 service in CLCGB – and he is still serving! Don Nuttall joined the CLB as a boy and has never looked back.

Many of his ‘old boys’ – including our current Treasurer, John Smith, - came to celebrate with him, along with the local congregation, and officers from other Manchester Regimental companies.

Don was presented with an engraved crystal bowl by the Vicar, Steve James, who also preached and played bass guitar to all of the hymns and songs!

At the same service, Martin Lambourne also presented Pam Corbishley, our Governor, with the Brigade Cross in recognition of her long and committed service to the Brigade, including her leadership of Manchester Regiment as well as of the Brigade as a whole.

To see more pictures click on the following link: Don Nuttals 75 years in the CLCGB