Please see this opportunity for young leader training, its online and its only 90 minutes on 20th June 2022.  Sponsored by The Duke of Edinburgh Award Scheme, this was brought to our attention by our DofE Coordinator Richie Clarke

To mark Volunteers Week in June, our monthly Empowering Communities Good Practice Workshop is all about how to work successfully with young volunteers. Teenagers under 18 can be a brilliant addition to your volunteer team, bringing new ideas and energy to your project but what's a good way of recruiting from this age group and how is working with them different to supporting adult volunteers?

We will be joined by our local Duke of Edinburgh Awards team who will explain how they are expanding their work in this region and how this will increase the number of young people looking for placements.

" The DofE currently has a network of over 3,000 Licensed Organisations, including local authorities, schools, youth clubs, young offenders institutions, businesses and national organisations such as the Guides and Scouts, with the support of an army of over 40,000 volunteers. We want to inform local voluntary and community organisations of the many ways they can engage with young DofE volunteers. In turn this enables us to improve access to meaningful volunteering opportunities and high-quality activities for young people doing their DofE."

We will also be joined by local and community organisations who already work with younger volunteers and they will be sharing their ideas and experiences of working with this age group.

There will also be opportunity for a wider conversation about the opportunities and challenges of working with young volunteers breakout rooms .

This free workshop is brought to you as part of the Empowering Communities partnership.

To register to participate click on the following link: https://www.eventbrite.co.uk/e/good-practice-workshop-working-successfully-with-young-volunteers-tickets-333701168177

Further to another fantastic Dofe Zoom Catch-up meeting we now have dates in place to cover the following:

These courses are being run free of charge for us by Dofe Head Office, however, we do need 10 delegates per course to make it viable.

Both these courses are open to anyone who is already involved in Dofe and needs a refresher or for those who currently have no involvement but are interested in starting up Dofe within their Company. Please contact NHQ for further details.

A message from Louise Martin, daughter of the late Percy Donald Bickerton.

I write with reference to my father Mr Percy Donald Bickerton (Don) who was a captain with the CLB for many years at Christ the King, Aldersley, Tettenhall, Wolverhampton. I wish to inform you that he passed away on 20th April 2022. He was diagnosed with dementia approx 5 years ago which left him housebound. Although he did suffer towards the end of his life he remained very cheerful and happy ‘with his lot’ and enjoyed more time with his family during his confinement. The funeral is to be held at Christ the King on Monday 13th June at 12.15 at Christ the King and should any member of the brigade want to attend they would be most welcome. I know that after his group closed he used to go to brigade camp, each year, with the 1st Chester CLB to Prestatyn and other places. If they could be informed I would be most grateful.

We have many happy memories from our Annual Camps. I remember my first night duty was with Don. I was a sergeant at the time and at around 2am wondered where Captain Don was. I found him asleep on a camp bed in the mess ! Rest In Peace Don"

"RIP Sir, Thank you for your service to the Brigade"

If you require any further information, please do not hesitate to contact Brigade HQ for more information.

Over the Jubilee bank holiday weekend, we have made some amendments to BMS!

You will now notice that any expired date such as DBS or First Aid certificates these dates will turn red on your screen as pictured. 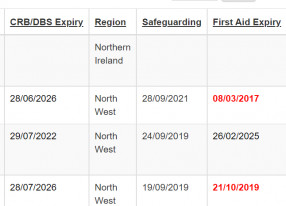 If you see any of these dates in red that are incorrect please contact NHQ as soon as possible.

Further amendments are going to be made, with the automation of reminders by email for those whose dates have expired or no dates have been entered.  Therefore, please ensure your data is up to date.

From our Bishop Visitor
On the Occasion of the Platinum Jubilee of the Sovereign
On behalf of the Church Lads’ and Church Girls’ Brigade, I offer thanks to Almighty God for the work of His grace in the life and reign of Her Majesty Queen Elizabeth II, whose Platinum Jubilee as Monarch we celebrate at this time.
As spiritual preparation for her Coronation in 1953, the Archbishop of Canterbury, Archbishop Geoffrey Fisher, gave to Princess Elizabeth a small book of Private Devotions: prayers and scriptural readings to be used from 01 May until the Coronation on 02 June. These served as a guide for the awesome responsibilities of monarchy, drawing on the relationship of human authority to the authority of God from which it is derived. Within the ceremony of Coronation came the rite of Anointing, in which the Archbishop marked the Queen, wearing a simple white dress without regal robes, on hands and head with sacred oil. To be anointed is to be set apart for a special task by God, as Christ, ‘the anointed one’, was marked by the Holy Spirit at His baptism, and as all Christians are marked or anointed with oil at baptism. 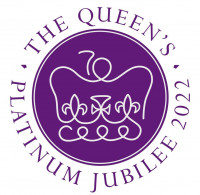 In these simple yet beautiful acts, we see the priestly task of the Christian sovereign, who is given a unique authority to lead and to care in God’s name. The Queen has reflected on her Anointing as the ‘inward and spiritual’ substance of sovereignty, with the Crowning as the ‘outward and secular’ aspect. But the Crowning too is priestly, as Archbishop Fisher made clear in the Private Devotions. He wrote: ‘There is another crown, the crown of thorns: its wearer wore it for an unworthy people and, by wearing it, made a way for their return to God.’
Queens and Kings, like Priests, are called to a way of life that is deeply sacrificial. There must have been times over the past 70 years when the royal crown seemed very heavy indeed. We can only be immensely grateful that our Queen has worn it faithfully as our anointed sovereign and, in so doing, has exemplified for her people a life of Christian service under the grace of Almighty God.
+ Peter Sodor as Mannin
Bishop-Visitor, CLCGB
02 June 2022