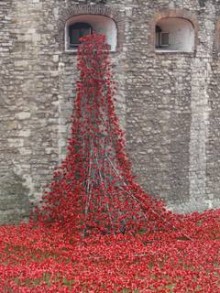 On Tuesday November 4th I set of with my wifeple of days in London staying with our friends in Orpington Kent. Wednesday the 5th we set of on the train to Tower bridge station for the short walk over the Thames to the Tower, we could see the massive crowd already one great big column of people all round the tower. So we joined the throng of people, the mood was very quiet people just talking. Looking moving on then looking again, there was no pushing or hogging places you just looked over the wall for a few minutes then moved on this we did for 2 hours until we got back to where we started if it had taken all day I would have still gone all round the Tower for what is a day compared for what they did for me. I talked to so many people just a few words, there was many a tear you just wiped your eyes no shame, to think every poppy I saw was a British soldier lost for me and you the moat around the Tower was like a sea of red blood their blood what a sacrifice, at several points there was poppies flowing out of the Tower wall just like a waterfall of blood. We were very lucky as the sun was shining and the poppies just glistened in the sun, At one point we got to where the boxes were and there were still several hundred boxes full not yet planted. I heard a few prayers now and then, at one point I actually recited the Brigade prayer in my head as earlier on in the year I went to the battle fields and war graves where I saw so many Kings Royal Rifle graves and 2 Brigade VC recipients graves. We saw several school groups going round the children were so well behaved some leaving pictures they had drawn at school about the war. At about lunch time we went to St Kathrin’s dock for something to eat then back again just for a second look as it was now getting dark before catching a bus to Trafalgar square. There was a large protest march going on against Political oppression I felt like telling them all to go and look at the poppies then think again, but no off for coffee then back to our Friends in Orpington. Our second day we went to Hastings for the Day our 43rd wedding anniversary. I have one of the poppies which I hope to receive sometime in the New Year. They gave that we might live.